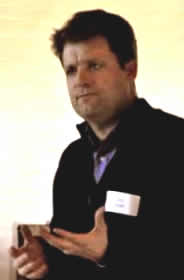 Ben Daniel was our Presenter for the 2012 Retreat.  A progressive Presbyterian minister who moonlights as a provider of left-leaning, spiritually-grounded, social and political commentary. Pastor of Foothill Presbyterian Church in East San Jose, his first book, Neighbor: Christian Encounters with “Illegal” Immigration was released in August, 2010 by Westminster John Knox Press and a second book on the relationship between Christianity and Islam is currently in the works.

His writing has appeared in a wide variety of print, broadcast and online media. Ben writes a column for the Huffington Post, and is a regular participant in the Perspective Program on KQED FM San Francisco, the nation’s largest NPR affiliate.

For our retreat, Ben Daniel explored with us some of the important issues raised in his book, Neighbor: Christian Encounterswith “Illegal” Immigration. We reflected upon our own understanding of how scripture calls us to relate to the strangers in our midst, and how to move from seeing them as strangers to knowing them as friends.

His book, Neighbor: Christian Encounters with “Illegal” Immigration is available in both paperback and Kindle format through Amazon.com (click here). in paperbook and nook format fromBarnes and Noble (click here) or it can be ordered from your local bookseller.

David Vallelunga provided Music and Worship Leadership for our event.  David is the pastor of Trinity United Methodist Church in Chico, California.

A talented musician and music leader, he incorporated music that was in keeping with the theme of our retreat, using a variety of instruments to lead the worship.  He also presided over a service of the Lord’s Supper to close our time together.